Last night on The Colbert Report, Stephen interviewed string theorist Brian Greene about his new book, Hidden Reality: Parallel Universes and the Deep Laws of the Cosmos. Working through advanced physics, Greene suggests that existence is not limited to a single universe, but is composed of multiple parallel universes.  His parallel universe theory comes from his work in math.  Citing examples from Pythagoras to Einstein, Greene claims that math is "a sure footed guide to revealing the nature of reality."  Greene's mathematical theories suggest that the "scope of reality is so much bigger than we once thought."

If Greene's theory is correct, what are these parallel universes like?   Beneath his satire performance, Colbert asks a really crucial question, "how do you look outside of what is to you everything?"  How do we examine alternative and outside universes when we, the observers, are positioned within a set and unquestioned sense of reality?  How do we glimpse to the parallel, multiple, alternative universes potentially amongst us?

Refinished Cabinet: Before and After

I found this cabinet outside of my apartment building in Brookline during the summer of 2009, right before my move to Blaine Street, and with my rapid accumulation of things that marks life after college, l I really needed extra storage.

Its past owner tried to paint the cabinet over with a blue acrylic wall paint, but since this has the infamous IKEA finish (veneer or lacquer) and they didn't sand it, the paint just peeled off in gooey strips. So, they tossed it. 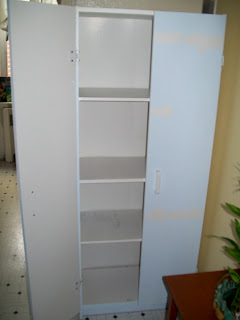 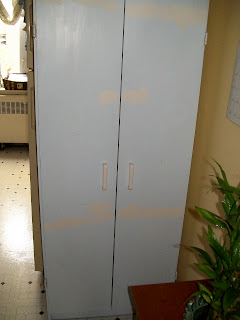 Mine!
I went to work peeling off the blue paint and was left with a mostly white cabinet with some stubborn blue streaks and packing tape residue.  And then, I admit, it sat for awhile. . . and awhile longer.  After enough of Nate's gentle reminders, and a source of inspiration I set to work.

Sherry Turkle: The Effects of Technology

I saw this Colbert Report interview last night with Sherry Turkle promoting her new book, Alone Together.  She raises great questions about our relationship to objects, especially the ways we interact with digital technology and how it affects our relationships with others.  Watch the interview:

Side note: As a graduate student, I love what she says about "long form arguments."

Yesterday Tabitha and I talked about digital worlds and how humans interface with the artificial worlds of video and computer games. Tabitha raised the point that the digitalization of these game technology, such as Kinect which registers the body's movement and no longer requires a controller, creates a more open interface between the human user and the game. We are quickly seeing gaming systems, like Kinect and Wii Fit, adopt a more direct and 'natural' interface with the user, more seamlessly connecting to the user's natural body movements.  There is something interesting about the bodily experience of playing these games, especially games through Kinect and Wii where you can watch your avatar self move along with you. What would it take for users to confuse this virtual self with their real selves? There are already reports of this reality confusion among gamers who play World of Warcraft, Second Life, or Sims to obsessive and addictive levels. Are there people would rather choose to immerse completely in their digital reality, what does this behavior look like, and what are the social effects of this human relationship to technology?  This question is one in a series of many about our human relationship to objects, the emotional and bodily experience in these object interactions, and how it shapes our sense of ourselves and of reality.

I’m getting really into crafts these days.  Making something new out of something old, used, out of materials found about my apartment. Maybe I’m just a hoarder, but I love to have interesting things around me. Nate and I want a pack rat home, a place where our friends can just idly gaze around and see lots of different objects that interest or inspire them.  When I’m crafting I feel my creative imagination turn back on; its a bit rusty in these graduate school years of critical rigor. 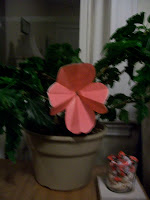 These crafts sometimes feel silly in the face of the graduate work I do, but sometimes a girl just needs to make a pink paper flower for her stubborn hibiscus plant.

Though I have yet to experience it myself, it seems 3D Televisions are gaining ground in the market.  Coming from my research in reader and audience relationship to the arts, I wonder, how does 3D Television affect viewers?  How does the experience of watching TV shape our senses of the world, of ourselves, of our very realities?  Since the content on 3D Television is largely the same as the 2D models- viewers are still watching football, Animal Planet, and sitcoms- it is the viewing experience of these seemingly 3-Dimensional images that differs.  Will the new visual effect change the way viewers experience the representations on TV?  Will it become more real for the viewers as Sony and Panasonic claim? And what would it mean to call the 3D television experience more real?


This commercial "Sony 3D: A Perfect World" from Sony Australia claims, like most 3D marketing, to deliver a world on TV not only as realistic as your actual life, but actually more real and even perfect.  These are not unfamiliar claims; its almost cliche to note that advertisements are well known for over-the-top promises.  But what happens when 3D TV delivers such realistic 3D representations of the world that viewers actually believe the representation is realer than the material world?  In its artistic manipulation of reality, 3D Television can come closer to a perfect world; it can eradicate poverty, war, disease, environmental devastation simply by not showing it on TV.  And if viewers buy this 3D TV reality, and immerse themselves into these fantasy worlds, what becomes of the rest of the material 'real' world?   This is the futurist in me, projecting far ahead, imagining how the dystopian tendency could play out with this technology.  I don't wish to make the reductive claim that  3D TV is an evil technology; as a TV and movie watcher,  I embrace the progress in visual technology and love the immersive fun of 3D IMAX movies. But I do want to open up a conversation about 3D TV and film technology and how it affects us as viewers.

On a sidenote, this post on Reddit is another instance in a greater trend on how our consumer culture understands the real. How do we gauge what is real? This is the bigger question that drives my research right now.

Shout out to The Morning Benders, the song in the commercial is "Excuses" from their album Big Echo. This is a great album.

Lana
English PhD Student. Reading my way through the literary and cinematic dreams of modern to contemporary America.